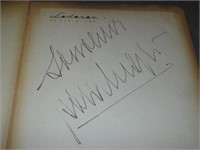 Place absentee bids here or bid live during the auction through Proxibid or Auctionzip
Auction Notice: Catalog is Complete. Sale will begin at 10AM on Sunday January 25th. Bidding through our website ends 15 minutes before the actual auction begins. Therefore, having the high bid on our website does not guarantee you will be the winning bidder. Bidding on our website places you in the running and your bids will be executed once the auction begins live. Please Note: When bidding on items that are framed, please consider the frame a bonus as we are auctioning the image itself, and will not be responsible for any damage to the frame or that may occur during shipping.
Location
Lynbrook, NY
Details
Auction Details
Catalog
View Catalog (721 Lots)
Single Page