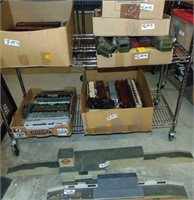 We are proud to offer Part 1 of the Jan Kalas Estate Collection of Toy Trains which includes many uncataloged and scarce sets and variations. Made up of mainly Lionel Pre & Post War, but with examples from Ives as well. Also offered with be another selection of American & European Trains and Toys from the Jerry & Nina Green Collection. This sale will also feature the debut of the Massive Toy Collection of George Dominguez which is loaded with hundreds of Battery Operated Toys, most in original boxes, Collection of Brass Trains in a variety of scales, Still and Mechanical Banks, and also loaded with Baby Boomer toys including Transformers, He-Man, Shogun Warriors, and the list go on. Also included will be Diecast with Hundreds of Old Store Stock Matchbox, Toy Soldiers, Dolls and More. The Kalas Collection has an Inventory that is based on storage box contents, not sets, so we will try and give some highlights as best as we can. Early 400E Blue Comet set, there appears to be a Macy Special light green 8 set, double boxed separate sale 384 steam loco and an Ives 1770E, Boxed set 385 & 39. There should be a 408E set in pea, State set and 380E set with large 430 cars as well. There are many High grade O gauge boxed sets with 248s, 252s, 253, 245s, 259E and others. We found a clean 255E set with red & silver 613 cars; double boxed 260E in gunmetal, with brick boxes and master carton. There is a like new boxed terra-cotta 253 and we are hoping he has the matching cars. We have a near flawless boxed 251E loco, high grade 251 gray set and a nice 763E Semi-scale hudson. We unearthed a high grade orange 254 with its box, and found 2 cars as well. There is inventoried a 263E Blue Comet set; 226E with 2613 Two Tone Green passenger cars, Boxed & Set boxed 636W City of Denver Streamline, and the much more. In addition, there are many boxed accessories. We found an early & late 300 Hellgate bridge, both with their scarce boxes, super boxed late 116 double-window station and two original 444 roundhouse sections, 1 a bit dirty. Inventoried are many boxed signals and lampposts with some unusual variations, but we have found more boxed than accessories at this point, so expect many surprises. This collection is Huge, with many surprises and will be spaced out and placed in multiple sales. We will be offering another selection from the Fabulous Jerry and Nina Green Collection, with a selection of American and European Trains and Toys including Issemayer Train Set & Station, Rossignol Tin Trolley, Early American Gauge 1 Trolley, Scarce Large Size Carpenter Floor Train, Early Carette Gauge 1 Baggage Car, and more. The Massive Toy Collection of George Dominguez will debut in this sale with a sampling of his Battery Operated Toys with highlights including Rare, Snappy the Happy Bubble Blowing Dragon Toy by Marx, Linemar Bubble Blowing Popeye, Linemar Remote Control Popeye in Rowboat, Rare, Boxed "Pleasant Kappa", Mr. Fox the Magician, Mickey Mouse Magician, Boxed Knight in Armor Target Game, Boxed All Stars Mr. Baseball Jr, Marx Whistling Spooky Kooky Tree, and More. This collection which will ultimately take 4-5 fifteen foot box trucks to move is highlighted by several hundred Battery Operated Toys, most in the original boxes, a vast collection of Brass Trains in a variety of scales, Still and Mechanical Banks, a large selection of Japanese Shogun and Transformer Toys, and for the Baby Boomers a great collection of He-Man Figures, Voltron, MASK, and More. This collection also will be spaced out and placed in multiple sales. We will continue with the Pennsylvania “Matchbox Hoard” a collection we have featured for the last two years and still includes hundreds of old store stock Matchbox vehicles from the early 60’s to early 70’s. Toy soldiers will be included with Britains, Mignot, King and Country, Tradition, Steadfast and other makers being represented. We will also have for the Doll Collectors a nice selection of Bisque to Barbie with a new collection that just arrived including Boxed Early Madame Alexander Dolls, Ginny Dolls, 1960’s Barbies both dolls and outfits, and Much More.
Bidding Notice:

Auction Notice: CATALOG IS COMPLETE, MORE IMAGES ARE BEING ADDED DAILY. Sale will begin at 10am on Wednesday June 20th. Bidding through our website ends 15 minutes before the actual auction begins. Therefore, having the high bid on our website does not guarantee you will be the winning bidder. Bidding on our website places you in the running and your bids will be executed once the auction begins live. Please Note: When bidding on items that are framed, please consider the frame a bonus as we are auctioning the image itself, and will not be responsible for any damage to the frame or that may occur during shipping.
Location
Lynbrook, NY
Details
Auction Details
Catalog
View Catalog (550 Lots)
Single Page